Prague might just be the ideal destination for street photographers. Safe and easy to explore on foot, it is home to an endlessness of historic architectural riches with flashes of Communist brutalism. To wander through its cobbled streets is to be presented with a new Gothic masterpiece seemingly waiting around every corner, then suddenly by some anarchically incongruous David Černý sculpture, like the giant crawling babies on the TV tower, or the appropriately-named "Piss" statues outside the Kafka Museum.

In some parts of the town centre you'll run into a dense tourist throng. Suffocating and permanent, it is nevertheless so well contained that a quick turn down a side street provides an instant escape to an easy and tranquil Prague, equally beautiful but barely disturbed by comparison, where locals escape for a glass or two of the world's best lager.

I'm at my happiest as a photographer when the sun is out and low in the sky, and I'm exploring a new city in search of light & lines. I even got up at 6am on my final morning (not a discipline that comes naturally to me) to catch the long shadows.

Bearing in mind that Prague's "New Town" was founded in 1348, I use the term "Old Prague" loosely.

Many of these images were taken in Malá Strana, west of the Vltava river and away from the more crowded town centre. The streets there tend to be narrower, with steps and steep inclines leading up to the famous Prague Castle.

I tried to make use of Prague's golden palettes and many archways in my compositions. In the evening light, they came together particularly beautifully.

COMMUNISM AND THE 21ST CENTURY

Czechoslovakia was a proud democracy during the interwar years and was successfully re-established following Nazi annexation and occupation. A few years later, though, the Communists seized power, and the country effectively existed as a vassal state to the Soviet Union until the Velvet Revolution restored democratic rule in 1989.

A casual wander around Prague's city centre doesn't reveal much of its recent communist past, but after a while, small reminders start appearing everywhere, whether in the shape of small 1980s shopping galleries or socialist-style 'Jidelna' eateries. I'd recommend these, by the way. There's a good chance you'll be shouted at by at least one of the staff, displeased with your poor grasp of Czech, but by God the food is cheap and delicious (I don't have pictures; I was too busy getting on with the eating).

Since then, Prague has embraced modern and often controversial additions, such as Milunic & Gehry's "Dancing House" and the subversive silliness of sculptor David Černý. Černý's most obvious contributions are climbing up and down the Communist-era Žižkov Tower. "Tower Babies" was conceived as a temporary exhibit, but proved so popular that it was made permanent the following year.

This is an uncharitable but fair description of the stretch between the Old Town Square and the Charles Bridge, and perhaps also around Prague Castle. Large tour groups shuffle along, flanked by eager Trdelnik* sellers and street vendors. Some men dressed, inexplicably, in giant panda and polar bear suits stand for hours on end in the Old Town Square. It's oddly compelling, though best avoided if you're not a fan of crowds.

*Trdelnik - sugared cake made on a spit. Either Slovak or Hungarian in origin, but popular in Prague.

The latest addition to this, and presumably to every photogenic city in the world, is the wannabe Instagram influencer, striking model-esque poses with identical backdrops, usually with a slightly harrassed partner/photographer in tow. 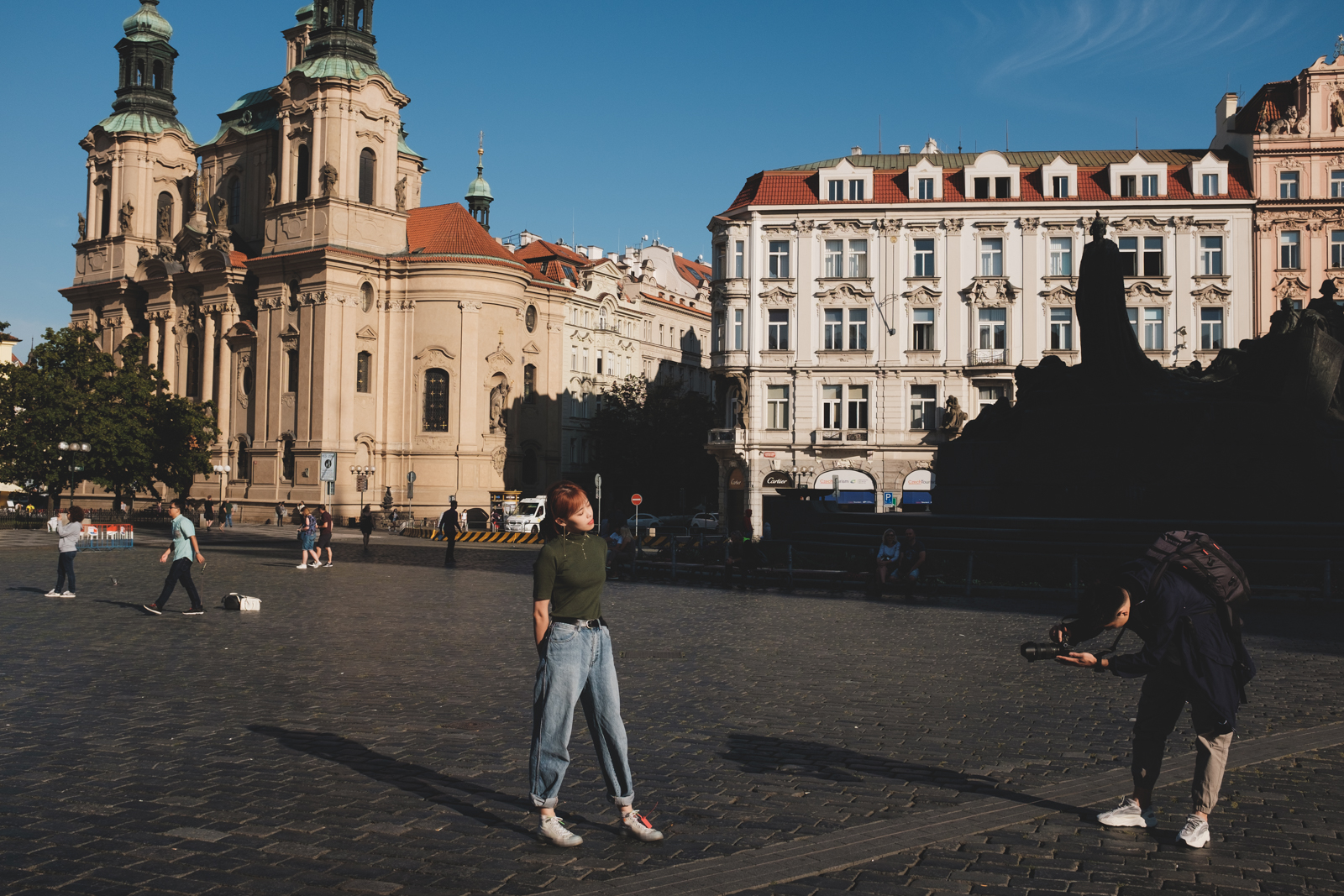 I thought it was worth trying to capture something of Prague's tourist side, as well as the more tranquil corners I explored as the sun was setting.

Among the places I ran out of time to see were Pilsen (no further explanation needed) and the Sedlec Ossuary in nearby Kutna Hora, home to the skeletons of tens of thousands of people - surely an opportunity for some unique images...! In the end, though, I was reluctant to spend much time away from this incredible city.

Home to the traditional, the silly, the progressive and the diverse, Prague wears its contrasts with style. It's hard to imagine a better place to escape to for a few days in August.

I think I finally figured out my street photography kit on this trip. My workhorse, as ever, is the Fujifilm X100T (23mm f2, 35mm equiv. fixed lens). My diminutive but hugely capable X-E3 also came along, paired almost exclusively with my XF 18mm f2 lens. I sang this lens' praises in my last post, so won't repeat myself here.

I also brought the XF 35mm f2, but when I needed an alternative to the X100T, it was always the extra width I found myself reaching for. Luckily the 35mm lens is so light that you might as well bring it along anyway.

All of the above images are shot either with the X100T or XF 18mm f2. The 53mm equivalent focal length that the 35mm f2 provides isn't one I've ever been at ease with on the street. Odd, really, given that so many street photographers (Henri Cartier-Bresson the most famous example) prefer that kind of perspective. Perhaps I need to leave the house with this lens attached and force myself into new compositions. It would certainly give me something to write about!

Editing was in Lightroom and Capture One (on trial - the jury is out but making positive noises) with a bunch of presets I've either made or adapted.

Future plans include a quick trip to Malta on Brexit day (!), and eagerly scouring the internet for rumours about the upcoming X-Pro 3. Happy travelling & shooting to everyone and thanks for making it this far.